Now that Microsoft Edge is being developed using the chromium engine and it can use Chrome extensions, please can Tabs Outliner support it?

I have installed Tabs Outliner in 'Edge dev', and it seems to be excellent, considering the limitations of chromium in that it will not allow the Tabs Outliner window to be permanently there within the window, like Firefox allows with similar extensions.

I've recently got a new laptop so am looking at ways that I can work across both desktop and laptop without losing productivity.  Tabs Outliner seems to be an excellent option, and if I can get this sorted then a paid upgrade is a definite.

Regrettably, it does not let me save backups to the google drive, because it is Edge dev not Google Chrome, and I'm logged in to my OneDrive account, not my Google account.  I use Edge for different things than Google Chrome.

I am also now planning to use it in Google Chrome, and in that, Tabs Outliner runs separate from the instance in Edge beta, and happily allows me to select my google account to backup to.

I'd be in favor of any sync even google drive sync working within edge. The problem is that edge doesn't know my google account and as a result the cloud saving/syncing feature outright doesn't work within Edge.

I would also appreciate having this functionality as well.  It seems as simple as verifying that the person signing in using a Microsoft Edge browser is using an email account associated with Microsoft, probably, @hotmail.com, @live.com, @msn.com, or @outlook.com, just to name a few possibilities, associated with the same Google account used at registration and given to the license operator, which would use 2 email accounts to verify the instance of Tabs Outliner, instead of the one Google account, since Edge only allows sign-in with Microsoft account email.  If the developer allowed at registration a mere 2 email accounts, the Google email used at registration, and a single Microsoft email account (although I have 5 Microsoft accounts myself, I don't know if he would go for that many and I personally would settle for just one), because in a few ways I do like this Edge browser better than Chrome, not to mention they just added the vertical tabs in the left sidebar as well.

Even if the developer has not answered for now, he has taken time away from developing the app before, and then come to it as his life and time allows.  I think he goes to school and works part time as well.  But if he reads this I am just putting in my vote for wanting this feature also, I like the new Microsoft Edge based on Chromium, the Tabs Outliner would make it for me, but without it I just can't use it, I need Tabs Outliner to work in the new Edge browser, which it does without the Premium features, which is just undoable.  I paid to use the Premium Features, and I would even pay a little more to have this feature added I like it this much, although I know people who just came to Tabs Outliner may not feel that way.  I got Premium in 2017 or 18 sometime, so it has been 3 or 4 years for me as a Premium user, I used the free version since 2012 or 2013 before that.  I feel lost trying to use Edge without Tabs Outliner and simply the ability to align all the Tab hierarchy to the left if I want to.

It especially annoys me that the Help Window has a popup that says "Drop Invalid License Key and Purchase Valid License," when I already have a valid license, it assumes I am counterfeiting something when I purchased a valid license, and an update to the operating conditions hasn't been made, to avoid these embarrassing messages.  Otherwise, its's just Chrome for me as long as things stay this way, I am content to do that, although I wish I could use Edge Chromium with Tabs Outliner instead of Chrome.

Yeah, it'd be rad to have Tab Outliners supported natively as an Edge extension, as I also have it installed on my edge browser from the chrome webstore with the added functionality Microsoft added to allow chrome addons from the chrome webstore to be installed on its own similarly derived chromium engine. I'm sure you all know what i'm talking about.

Only cross-compatibility issue i've run into so far is when attempting to enable 'Google Drive Backups' in the Tabs Outliner 'Extension Options' page found under 'Manage Extension' for Tab Outliner and the 'Extension Options' at bottom of page. Perhaps it is accessible elsewhere in the extension menus. I haven't explored use cases for all of the options and functionality but I saw enough, def use it enough, and see convenience it facilitates for me enough to pay for a license.

I would be willing to pay the cost of buying a license all over again just for the port to edge extensions, what with chrome and edge both on cromium it couldn't be that hard. Just some issue with Oauth lining up when attempting to authorize Gdrive from the chrome-webstore-jiggarigged-addon-install in Edge. (lol)

Error says this in a popup when i click 'Click to allow at top of that Extension Options page ir anywhere further down gives same error: 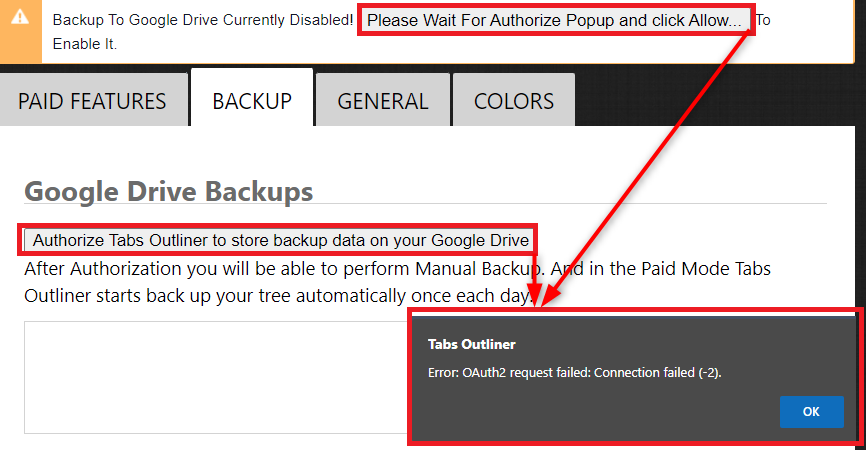 Just wanted to submit my agreeance with porting to edge extension or at least support for the full functionality but on the chrome webstore version installed on edge. Also I wanted to thank you for your work on this, it is quite handy and quite unlike all the other tab managers I have used. I can see that you must be Autist level 'extra' throughout the program but mainly in the number of options/menu functions and in the in-app (in-extension) instructions embedded within the program itself to ensure that people actually grasp its usefulness and potential as most people perceive at depths a bit shallow most likely to intake it all. Just my observation though, I'm prolly smokin' rocks on the regular. Anywho, good Job to whoever made this, i didn't catch the name to have in my memory. Really good job, I like it a lot and such is why i'm a paying customer who will, i repeat, pay again to you whenever you get time and inspiration to get around to the 'updated' and much better version. Like, spitballin' here, it would be pretty badass if it was a full exe/msi w/e installer for windows that ran above the browser level so as to be tab outliner for 'all browsers' at once so that tabs could flow between actual browsers like from chrome→edge→firefox→waterfox and so on. I dunno if thats even doable, but i see that to be a positive direction if said inspiration does indeed spark the flame from the embers kindling within your creative being and if it is even possible.

I like to get at the coders and program makers that make good stuff because its important to me to just drop them some lines, show some love, purchase the license (yes i pirate software. but good stuff i begin working with i buy. cuz yeah, stick it to the man, but not the little man/little guy at the bottom that actually made the stuff they should get supported. Because a world without coders is bleak indeed.