How can I restore the Tabs Outliner own window if I accidentally close it?

I have a small notebook screen.

Therefore, I would be thankful if I could hide the scrollbar.

It could be showed, if one have more tabs open than vertical space available.

optional Do Not Scroll for newly created nodes

This shows current behavior when creating a new Note, for example: 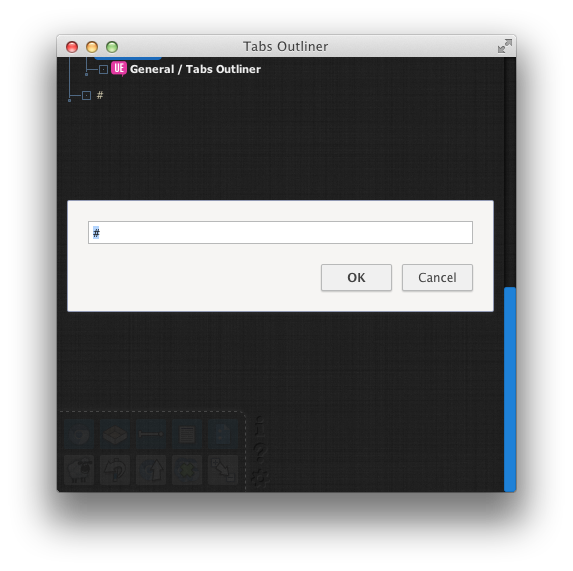 I think it would work better if it instead scrolled like this: 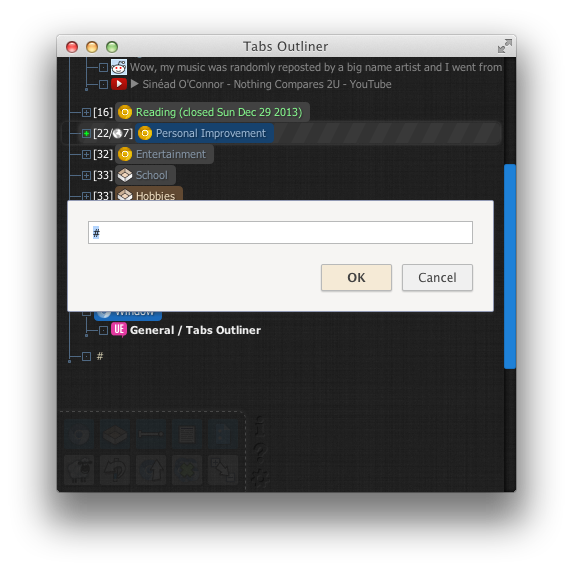 This lets you continue viewing the rest of the list when a new node is created. Whenever I create a note or window, it's usually because I'm going to put other things inside it, and put it in another category. Having to scroll back up when I create a Note feels a bit silly, especially with so much empty space being shown instead of the list.

There is the separate issue of how the editing prompt could be improved, which I've filed as a separate idea.
Vote

Answer
vladyslav.volovyk 8 years ago
It's a real issue, through i must note that this buttons is very rarely just clicked, they mostly dragged i the tree, directly in correct place.

This is mostly a quick hack. One line instead of the day of work and tests... But it must be fixed of course, and replaced by a more polished solution.

I have just started using your extension, and it seems to be a very promising one. After Chrome crashed, I opened it again, clicked on Tabs Outliner button to open its tab, and double-clicked to open one of the crashed tabs from the previous session. So far so good. But then I noticed that there are two kinds of formatting in windows (parent nodes): Window (crashed Sat Mar 23 2013) is sometimes in grey-blue and sometimes in bold green. The crash happened around midnight. Are the windows that crashed after midnight in bold green to indicate that they are today's windows, perhaps? I didn't find any info on this in the documentation.

What's more important, though, there are some "Window (crashed Sun Mar 24 2013)" windows without any tabs under them. When double-clicked, they open a new blank tab. I am worried that they contained tabs that were lost after the crash. Is this possible? Any help appreciated!

Somewhere in the help, there should be an explanation of what all the buttons do; I'm not getting tooltips.

I guess I do not really understand what that "Clone View" is for...

From the tooltip it seems that it's just a Tabs Outliner window with auto-scrolling disabled. So, why not just a button or setting to turn auto-scrolling on and off?

Also, is the Clone View supposed to open in a usual Chrome window (at least that's the case for me)? If so, why?

By the way, thanks for your great work :)

Really enjoy Tabs Outliner since switching from Session Buddy. It's a better plugin overall. That being said I definitely "appreciate" the way Session Buddy seems like a proper extension of Chrome, its GUI definitely matches the default Chrome styling. Would love to see a second UI option that looks more like Chrome.

Thanks for the excellent work!

How to transfer tab outlines between different versions of Chrome?

Answer
vladyslav.volovyk 8 years ago
First of all note that you can move the whole windows hierarchies, by drag and drop, from the saved HTML file to the TO window.

There is also possible to transfer the whole database to a new Chrome instance:
https://groups.google.com/d/msg/tabs-outliner-support-group/eKubL9Iw230/oLZlzTUb7R0J
But please make a Ctrl-S backup before this, as during this you will lost the present data in the target instance of Tabs Outliner

Having close etc buttons on left

Related to a request within another request from Roel.  Have you considered having the option to put the close / trash / note buttons on the left of the tree?  Is this something that can be adjusted with the CCS?

robin smith 8 years ago • 0
I'm having a problem saving, TO won't save and won't close.  There isn't a way to close the popup warning that your about to save and close all tabs. I'm saving to Dropbox and can see saved tabs.
Vote
﻿