Support the operations in Windows 8 mode

I'm not sure this has been posted about before. When browsing, I have recently noticed a behavior/bug that was not present before I went to Chrome v26. Sometimes tabs stay in Tabs Outliner after they have been closed. These are tabs that were generally (always?) closed via Chrome's interface (the 'x' on the tab), or by closing the entire window with the 'x'.Furthermore, they often show up in a different part of the tree (different window) than where they were originally. Clicking on them does nothing, but they can be removed with the trash icon.

Additionally, Chrome about:memory shows some usual results. Right now, I have a "tab" line item using 700K of memory with 8 lines under it that say merely "Google". This whole beast shares the same PID. I have no idea what this is as I don't have any tabs open that are named just "Google". Things like this started showing up in the memory detail screen when the aforementioned bug started appearing. They usually waste a lot of memory.

Great extension by the way, thanks!

Alexander Phoenix 7 years ago • updated by vladyslav.volovyk 7 years ago • 1
For those who open million tabs for research purposes, but can't afford to.

This would be very helpful.  Something akin to the mouse-over of the windows in the tray.  Sometimes you store the look and layout of the page in your memory as a way to find it in the future without paying much attention to the page's title.  This is more efficient than trying to remember the title of every window.  Sometimes the windows don't have the most descriptive titles, or different looking windows may have similar titles.  Going through and typing a comment for each window is quite inefficient too.

I'm not sure what the best way to implement this is.  Maybe show a picture in a tooltip when you mouse-over each list item, maybe a new view entirely which shows a picture of all windows.  Another idea is a menu-like system, similar to the task bar in windows 7 where if you mouse-over a window, a menu showing pictures of each tab shows up.  Humans seem to do well with sorting things to tree-like structures such as this so I think it would be easy to navigate.

>  This is more efficient than trying to remember the title of every window.

Actually if for this need to hover every single window to popup its thumbnail - it's not.

I am actually never feels that i need this feature. Not sure i want to bloat a simple program by such things. There is a lot of tabs manager with this features and they never satisfy me. The idea looks cool but only when you have 2-3 screens of such thumbnails, or 5-7 windows to hover.

Hi, I have paid for the pro version, however there is a popup whenever I delete more than 3 tabs in the tabs outliner window. 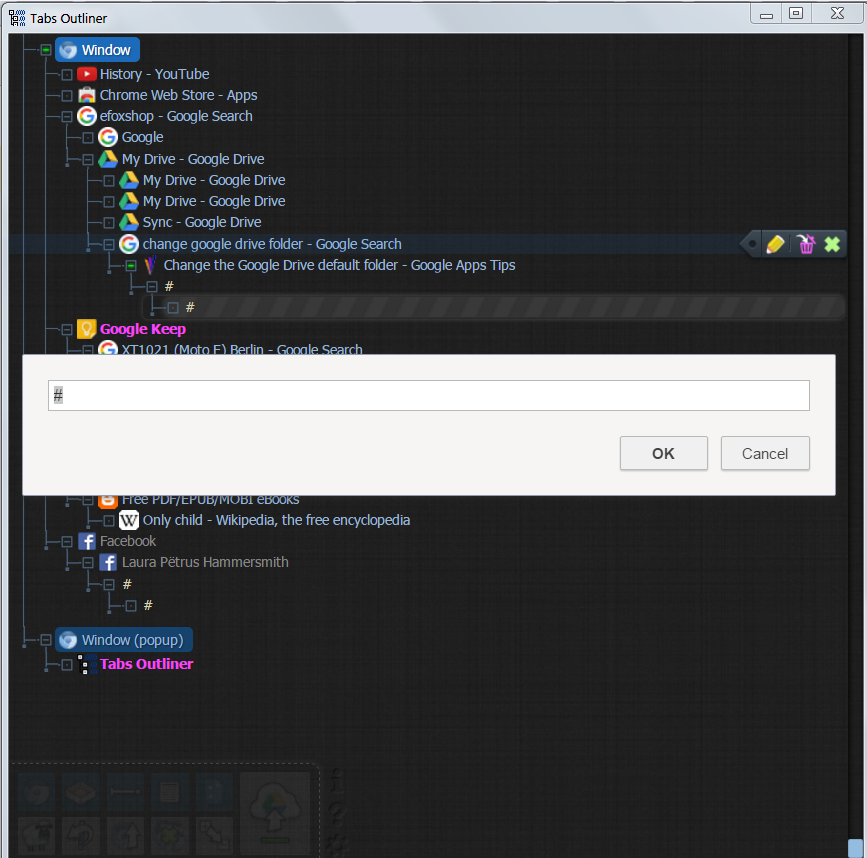 Would it be possible the save the Tabs Outliner's window's position in the list?

As the title suggests I like the idea of having the Tabs Outliner window at the very top of my window list and having it remain there even when I reopen Chrome (which happens quite a lot). You can only have one instance of the TO popup window anyway and you can't open another tab in that window (a new window is created as a parent instead), why not just save it? I'm pretty confident that this is possible.

Open chrome directly to TO window

Is there any way to open TO directly when starting Chrome?

I saw some similar ideas but I think my propose is quite different.

The window where tabs outliner runs is separate from main window. My monitor is 17" not wide screen. I cannot use it that way... Even on widescreen it takes a lot of space.

So at linux I coded a script that when the mouse is near the left edge of the screen and was already above normal chromium window, tabs outliner window is shown;

When it moves away from that window and to above normal chromium window, the normal window it is shown (so tabs outliner window goes to behind it). Other windows of other applications are protected from that behavior.

EDIT: the script also detects a url was clicked on tabs ouliner and automatically activates the normal chromium window!

I think you may be able to use the "on top" window flag to do that trick that may work on all OSs, when the mouse reaches the left edge of normal chromium window! EDIT: Just toggle on top, and toggle back again so release its top towards other applications.

PS.: my script probably only works on linux, it is a bash script...

"on top" window flag is unfortunately is not accessible to Chrome extensions.

So this behavior is only possible using the external system utilities to manage window.

Option to focus on single window

There, you save about 40px of horizontal screen space by listing only the tabs of the current window. It could be simply done by giving the option to hide the "session" and "window" tabs. Then the element far left will be the first open tab.

How can I restore the Tabs Outliner own window if I accidentally close it?